While developing my subproject, I had faced a problem creating a view with buttons, which appears like dropdown when the user taps on
table view's cell. Seeking the best way how to do it, I googled a lot, read many posts from StackOverflow and all that suggestions were
really shitty, as for me. So, as usually, I decided to create yet another own bicycle :)

What we want to achieve:

So, as you can see from GIF above, this is the menu we want to achieve:

Let's try to implement it and create as little as possible bicycles in the code!

Create a cell inside table view, give it a reuse identifier (e.g. cell) and a custom class (let's name it TableViewCell). Set
cell's selection to None. 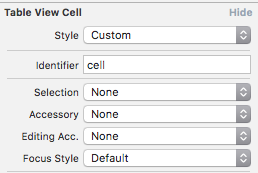 Now let's work with a cell for a while. Create 2 views inside a cell, where the first view will fit usual content your cell should have,
like, in our case - UILabel, while another view will act as dropdown and contains some buttons - Share and Remove. Check
Clip To Bounds for the second view, so when it will fold, buttons inside it will be cutted correctly.

Add desired constraints for other views. As for buttons inside the second view, they should not be pinned to the top and bottom of
the superview, because, when this view will be collapsing, this buttons would follow it and decrease their height also, which looks awful.
Just add height constraints to them, and top left or top right.

Finally, it is a time for coding, to make all this alive. We don't need to touch AppDelegate at all, so leave it. Let's start from
TableViewController.swift. Create a class, which inherits from UITableViewController, and add some initial stuff. For this example
project, I took a default month labels from DateFormatter. Turn on automatic dimension for the table view, so cell's height will be
calculated automatically. Also, add helper function, which will allow you to easily update height of table's cells. Pity, but it is the one
solution how to do it for currently visible cells.

By default, UITableViewController conforms delegate and data source protocols of UITableView, so let's describe them. I like to code
them as an extension of the class, and add cells identifies as enums, but it is your choice how to format this code
(pay attention to comments):

As you saw above, we have called some strange method named toggleSelected of the table view's cell. We will implement it later.

What it does is that magic, which resizes height constraint of the second subview of a cell, but without animation. And the animated
version is located in overrode setSelected method.

Why is it done in this way? This method has 2 arguments - state, bool value which indicates the selection's state and animated,
which is also Bool, and tells the cell if it should use animations to update the view or update immediately. By default, when user taps
on any cell to select it, delegate calls setSelected method, providing to it false as a value for animated parameter, and it
does not suit me, that's why I can't rely on it.

So, we create 2 separate functions - one, which does the job, and another - calls the first with animation.

Let's take a look at the source code of the cell (don't forget about comments):

The only thing we missing is connect UILabel and NSLayoutConstraint outlets to the elements in a storyboard.

Finally, you can run the application now. Try to select and deselect a cell; select the first one and scroll up and down, so it
disappears and appears again - pay attention that it is rendered correctly; change screen orientation - everything works as expected.

I think we have achieved goals, which we had set before. Except I don't like that check for selected cell in cellForRowAt delegate's
method - but, again, it is the best solution I came to. Also, it is a shame that after all these years there are no other ways how to
update height of automatic dimension cell but calling beginUpdates/endUpdates.

There is another solution how to achieve dropdown menu in a table view via adding one more cell and controlling its position inside the
table - but I don't like it either because you can't design it as you want to.

Maybe you have a better way how to do it, or some improvements for this one? Share it with me! You can leave a Pull Request in a GitHub
repo, where this example project is located. By the way, here it is.

Wind of change in piracy, yet again

In short - a little more than a month ago our so-called cyber-police shut downed...

Sunday is another good day to fix the Xcode

Developing for Mac and iOS isn't my primary profile, but every time I open Xcode...